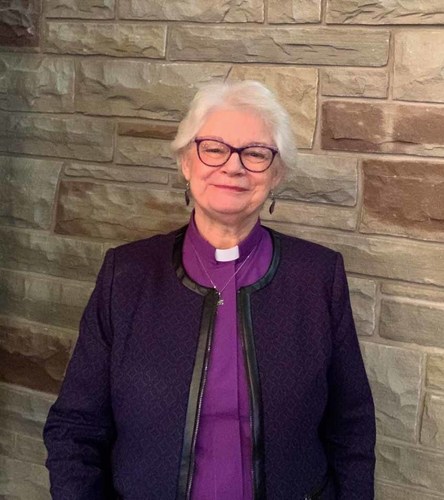 Reverend Jan McCormickBiographyBorn in England, Jan emigrated to Canada at a young age. She and her family settled in Guelph. During her teens, her parents bought a farm in Eramosa Township, giving her both urban and rural roots.Jan attended Queens University to study Physical Therapy. After graduation, she worked in hospitals, rehabilitation centers and private Physiotherapy clinics around the “Golden Horseshoe.” Later in her career, she worked in the community, providing “Home Care” to adults and children. Service has always been Jan’s vocation. During high school, she spent the summers working for the City of Guelph Parks and Recreation Department as a “Summer Playground Leader.” Working with a partner at a city park or school playground, she provided summer day camp programming for children. During the summer between high school and university, she broadened her horizons working for the Family Services Association of Toronto at Bolton Camp. There, she worked with mothers and children from the inner city, who would not otherwise have had a summer vacation. That summer, Jan met Andy McCormick, who was a counsellor in the boy’s section of the camp. They married several years later and have raised three sons together. Life changed dramatically when their middle son was killed in a motor vehicle accident. Being supported by others who were specialists in grieving gradually turned Jan’s focus from providing support from a medical perspective to one based in spirituality and theology.Starting with peer support for others who were grieving, Jan’s spiritual path led to leading faith formation groups at Appleby United Church to involvement in the Week of Guided Prayer Network of the United Church and eventually to Spiritual Direction. Jan completed the Ontario Jubilee Program in Spiritual Direction at Huron College, University of Western Ontario. Since completion of her training, Jan has offered Spiritual Direction to interested seekers in the privacy of her home office.But it wasn’t long before she began to sense that God was calling her to something more…..Upon sensing a call to ministry, Jan spent a year discerning her path before completing a Master of Divinity degree from the Atlantic School of Theology in Halifax. She graduated in May 2020. After several months delay due to Covid-19 restrictions, Jan was ordained by the United Church of Canada in November 2020. During the past seven years Jan has served as student minister/minister at Hillcrest United Church, Halton Hills and Supply Minister at Eden United Church in Mississauga.